Scotland has many traditional and quirky festivals but to be honest most of us don't need an excuse to celebrate how amazing our country is and what it has to offer.
Here is a selection, with links to some other websites for more detailed information.

Visiting friends and relatives immediately after New Year's Eve, in the early hours of the morning of January 1st. First footing after the bells have rung in the New Year is still common - the "first foot" in the house after midnight should be male, dark, and handsome and should carry symbolic coal, shortbread, salt, black bun (a spiced cake) and, of course, whisky.
In Kirkwall, Orkney, there is a New Year Ba' Game held in the streets of the town which can last most of January 1st, between the Uppies and the Doonies, or more correctly, "Up-the-Gates" and "Doon-the-Gates" from Old Norse "gata" (path or road). Burning of the Clavie - 11th January

In Burghead, Morayshire, a tar barrel filled with tar-soaked wood shavings is carried around the harbour and then to the Doorie Hill where the Celtic Druids used to light their fires.

Held in Lerwick, Shetland Islands, a full-sized Viking Galley, complete with shields and oars is pulled by a torch-bearing procession dressed as Viking warriors to the beach. Guizer Jarl calls for three cheers for the builders of the longship and after a bugle call, the galley is set alight by 800 blazing torches. 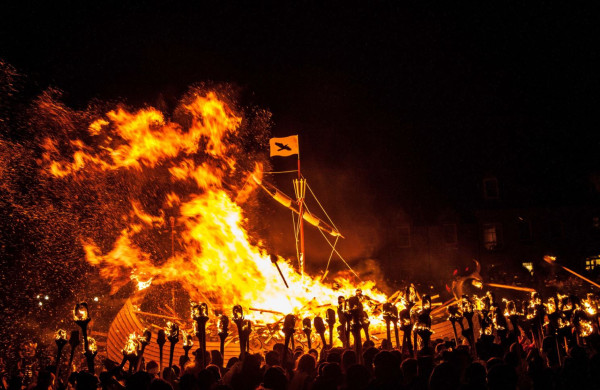 The anniversary of the birth of the poet Robert Burns, in 1759 at which many a "Burns Supper" is consumed and the "Immortal Memory", a speech in praise of the Bard, will be given. 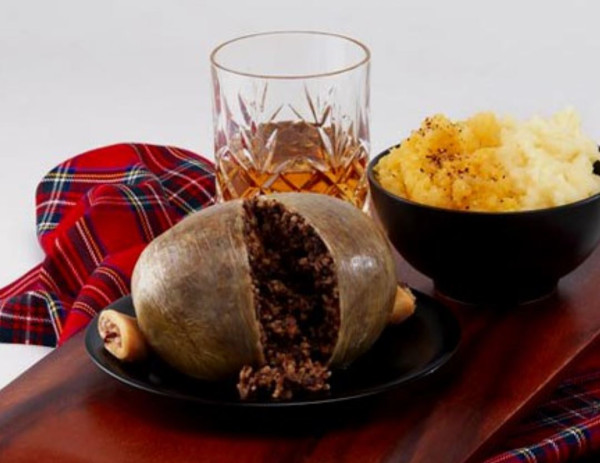 This used to be an excuse for youngsters to go around begging for sweets, money or fruit, while older brothers and sisters tried to find a sweetheart. "Name-papers" were sometimes used where names were written and placed in a bonnet and each person drew out a paper. If the same name was drawn three times, it meant a marriage would take place!

The Celtic New Year was celebrated on Samhain (November 1st). Then, until 1600, the Gregorian Calendar which was used in Scotland, placed New Year on 25th March.

There was a festival for "Eastre", a Saxon goddess of fertility, in pre-Christian times which was integrated into the Christian calendar. The date often moves because the calculation is based on phases of the moon. In Scotland, to this day, "hot cross buns" are baked, containing spices and fruit and with a white pastry cross. On Good Friday, no ploughing was done and no seed was sown. The custom of rolling painted, hard-boiled eggs down a hill took place on Easter Monday. On this day people would play tricks and tell lies to catch each other out. But the jokes had to stop at mid-day. Now called April Fool's Day, hunting the gowk was originally sending someone on a foolish errand.
"Dinna laugh, an' dinna smile
But hunt the gowk another mile"

The day following All Fool's Day when paper tails were attached to the backs of unsuspecting people as a joke.

A pagan fire festival which goes back to pre-Christian times - originating with Baal in Phoenicia. It was supposed to encourage the crops to grow. There has been a holiday at the start of May in many parts of Scotland for centuries. Young girls would also rise early to wash their faces in the May dew. The custom of lighting fires at this time has come through in place names such as Tarbolton in Ayrshire ("tor" meaning hill and "bolton" from "Beltane"). The ancient Druidic Fire Festival has been revived by "New Age" followers who gather on the historic Calton Hill in Edinburgh.

Flags were flown from public buildings and schools decorated classrooms with flags of the British Empire. The name was changed to Commonwealth Day. The nearest Monday to 24th May was a local trades holiday in many parts of Scotland to celebrate Queen Victoria's birthday and the tradition has continued long after Queen Victoria's reign.

A bannock (cake) was toasted on a fire in honour of the Virgin Mary.

The origin of this major Highland Games is said to go back to the 11th century when King Malcolm III "Canmore" gave a prize to the winner of a race to the top of Craig Choinnich. Queen Victoria ensured the success of the games into modern times by attending them in 1848 and the Royal family has been associated with them ever since. 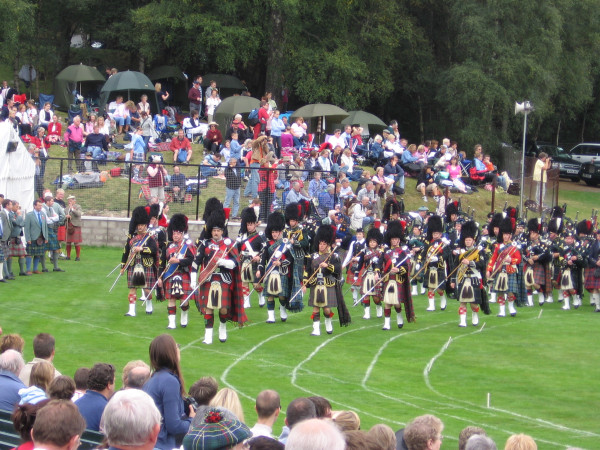 St Michael was the patron saint of the sea and sailors and his saint's day was celebrated in the West of Scotland in particular. In the island if Barra, a bannock was baked from the first grain of the year and eaten on St Michael's day. Everyone was given a piece to eat.

The evening of All Hallows (Saints) Day and the last day of the year in the old Celtic calendar. It was celebrated by the Druids as "Samhain" from "Sain" meaning summer and "fuin" meaning "ending". It was associated with witches and celebrated with bonfires and "guising" as children dressed up and went round neighbouring houses with "tattie bogles" or "neep lanterns" (candles inside turnips). The pumpkin serves the same purpose in the USA. There is a (long) poem by Robert Burns on Hallowe'en which gives a good description of the traditions which were followed in his day. Prayers were said for the souls of the dead and alms given to the poor.

Recalling the attempt by Guy Fawkes to blow up the Houses of Parliament with 20 barrels of gunpowder in 1605. Bonfires, fireworks and "penny for the guy" (an effigy of Guy Fawkes, providing an excuse for children to plead for money from passers-by). This is not a specifically Scottish festivity - it is UK wide but it took place shortly after the Union of the Crowns when King James VI of Scotland became king of England and Wales also. 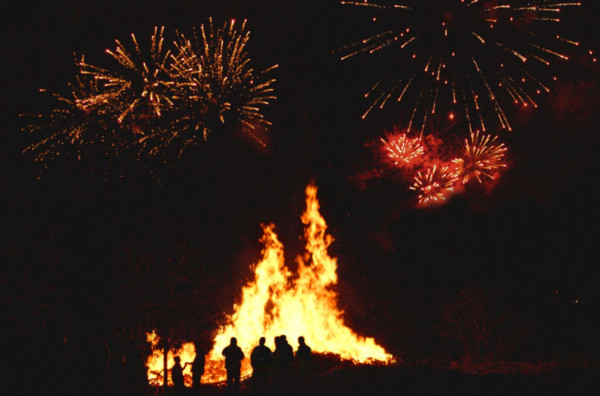 The last Scottish legal "Quarter Day" when rents and contracts fell due. Since fodder was becoming scarce by this time of the tear, cattle were often killed at this time. As a by-product of this the offal was mixed with oatmeal to make haggis and the blood used to make black puddings.

Although St Andrew has been the patron saint of Scotland since a Pictish victory in a battle in 747AD, for many years 30 November was not a recognised public holiday in Scotland. Indeed, St Andrew's night is celebrated more by expatriate Scots around the world. However, in 2006, the Scottish Parliament passed the St. Andrew's Day Bank Holiday (Scotland) Act 2007, which designated the Day as an official bank holiday. Even so, it was left to individual businesses to negotiate whether to give up another holiday in favour of St Andrew's Day. As the end of November is not a time when good weather might be expected, few companies have adopted it. Christmas Eve in some parts of Scotland is called "Sowans Nicht" from "sowans" - a dish made from oat husks and fine meal steeped in water. And branches of a rowan tree were burnt on Christmas Eve to signify that any bad feeling between friends or relatives had been put aside for Yuletide.

Like many ancient races, particularly those located in the northern latitudes, where winter days were short and the nights long, the pagan Celts had celebrations around the time of the winter solstice, in part to brighten the darkest days, in part to propitiate the gods to allow the sun to return. In Norse mythology, Odin the gift-bringer, swept across the night sky in a chariot drawn by horses. The Christian Church took over the festival but some of the traditions harked back to the pagan roots. The Yule log was burned in the fireplace, there was kissing under the mistletoe (related to a Druidic fertility rite) and the house was decorated with holly (evergreen trees were regarded with reverence).
But during the Church Reformation in the 16th century these traditions were frowned on by the Kirk which regarded Christmas as a popish festival. Bear in mind that "Christmas" is "Christ's Mass" and mass was banned in Scotland at that time. There are records of charges being brought against people for keeping "Yule" as it was called in Scotland. Amazingly, this dour, joy-crushing attitude lasted for 400 years. Until the 1960s, Christmas Day was a normal working day for most people in Scotland. So, if there is a specifically "Scottish" aspect to Christmas it is that it was not celebrated!
The "traditional" Christmas celebrations (other than the religious festival) originated in the 19th century (Prince Albert, Queen Victoria's husband, had a lot to do with it!) and England and Scotland developed the same traditions from around that time - Christmas trees, decorations, Santa Claus or Saint Nicholas, presents, stockings at the end of the bed, Christmas carols Christmas cards etc. Christmas cards are said to have been invented in Edinburgh in the mid-nineteenth century. 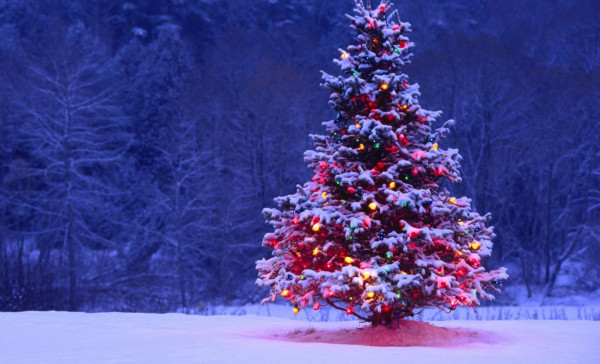 Yet another day on which gifts (in boxes) were exchanged.

The origins of the word "Hogmanay" are lost in the past. Some say it is from the Norse "Hoggunott" or night of slaughter when animals were killed for a midwinter feast. Also, that it is from "Huh-me-naay" or kiss me now when even strangers embraced. Another theory is that it comes from the French "Hoguinane" sung by children on "Cake Day".
To this day, Hogmanay is still a more important festival in Scotland than Christmas. Historians believe that we inherited the celebration from the Vikings who, coming from even further north than ourselves, paid even more attention to the passing of the shortest day. While clearly celebrated around the world, the Scots have a long rich heritage associated with this event, when the whole country celebrates in the build up to "the bells" chiming midnight - and Burns' song "Auld Lang Syne" is murdered once again!
There are traditions such as cleaning the house (known as "redding") on 31st December (including taking out the ashes from the fire in the days when coal fires were common). And Scotland is the only part of the UK that has a statutory holiday on 2nd January as well as 1st January - so we can recover from the excesses of 31st December!
In Stonehaven, around 45 local folk walk up the High Street at the first stroke of midnight from the Old Town Clock, swinging massive balls of flame around their heads. The fireballs are extinguished in spectacular fashion as they are hurled into the harbour, and then the New Year is celebrated with fireworks and a party. This is known as the Fireballs Ceremony