We decided at the very start of our journey that we wanted to be different and stand out from the crowd.

We didn't want to name our lodges 1,2,3 etc so whilst looking out over the stunning bay towards Dunnottar Castle we got some inspiration.  We would name our lodges after the spectacular sea cliff inlets that make the Stonehaven coastline so varied and interesting.

All of our lodges are south facing with a variety of views and vistas to suit all tastes. The short walk up the Bervie Braes provides wonderful views of Stonehaven Harbour and leads you to Strathlethan Bay. Its name is derived from the Old Scots words to describe a large, wide area of flat land adjacent to the coast and it remains a productive farming area to this day. Strathlethan Bay can look calm and inviting but many ships have been lured onto the rocks which flank either side, including the 961 ton steamer, Echo which ran aground in stormy weather in March 1928 and was abandoned by her crew. Just to the west, the bay is overlooked by the impressive Stonehaven War Memorial, erected in 1923 and designed to look unfinished as a mark of respect to those whose ruined lives it commemorates. An imposing neighbour to the south is Dunnottar Castle, which has protected its famous occupants and the surrounding area for over 1500 years.

The sweeping bay and steep cliffs of Craigeven Bay present a stunning coastal walk for visitors and golfers alike. Formed around 480 million years ago by the massive forces which generated the Highland Boundary Fault, the sea cliffs are cleaved from Dalradian rock and create the spectacular “Out of Bounds” limit for the third hole of Stonehaven Golf Course. Thought to have been used as a sheltered anchorage by an ancient fisherman, it is also known as Craig’s Haven. The ruined church and graveyard to the south of the bay are dedicated to St. Nathalan and St. Mary, sometimes called St. Mary of the Storms. It is easy to imagine that Craig and his fellow fisherman will have prayed to St. Mary for comfort when they sought shelter in the bay. A church has stood on the site since the 7th century and there are many interesting and unusual inscriptions on the headstones in the graveyard. 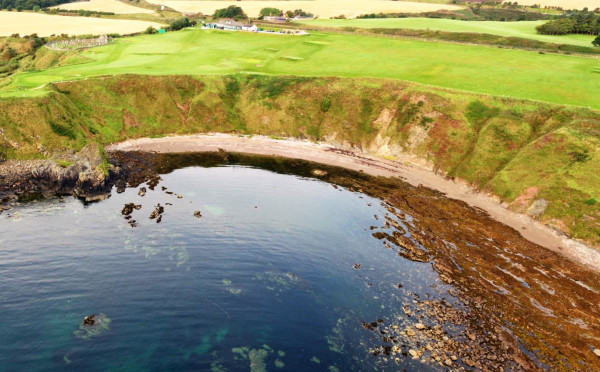 Brachans is a distinctive sandstone rocky outcrop within Stonehaven Bay that is clearly visible at low tide. It is thought to be named after the old Scots word for a quern or hand mill for grinding corn. The 420 million years old rock formation is a similar age and composition to those found at the Toutties in Cowie Harbour, where many fossil fish and other marine creatures have been discovered, including the remains of the world’s oldest known air breathing creature. The Brachans can be viewed whilst taking the pleasant stroll along the boardwalk and seafront pavement which extends just over a mile from Cowie to Stonehaven Harbour. The distinctive folds and deep crevices of the Brachans rocks provide an ideal home for a range of fish, which in turn encourage larger predators including guillemots, kittiwakes, cormorants, grey seals and regular visits from the local school of bottlenose dolphins. 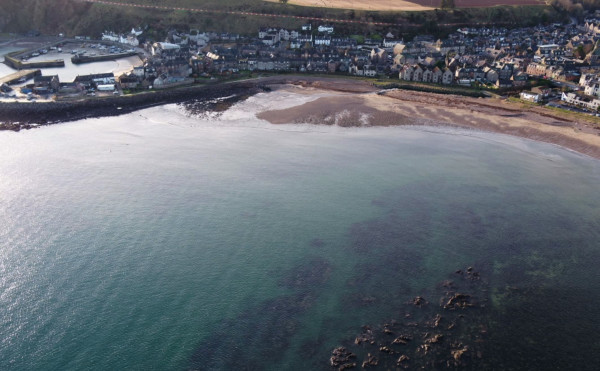 Ruthery Head juts out spectacularly into the North Sea and forms the first green and second tee of Stonehaven Golf Course. Ruthery is an old Scots word for stormy and it is fitting that the small church close to the base of the promontory is dedicated to St. Mary of the Storms. Ruthery is on the southern or lowland side of the Highland Boundary Fault and has the distinctive colour of the Old Red Sandstone sedimentary rocks that extend towards Stonehaven. These rocks are younger than the Dalradian rocks immediately to the north, being deposited around 428 million years ago. The sediments contain many rare fossils including the earliest land based creature yet found in the world. The tiny millipede was discovered by a local amateur fossil hunter and is believed to be one of the first animals which evolved to survive out of the ocean. Skatie Shore is a popular local beach which can be reached from Stonehaven Golf course, or by walking through the woodland of the Den of Cowie and beneath the impressive railway viaduct which carries the main train services from Aberdeen to all points south. In the Old Scots language, a Skate Hole was a shallow hollow in the coastal rocks, which could be reached between low and high tide and provided valuable sources of food including small fish, shellfish, crabs and edible seaweeds. Skatie Shore is the most southerly bay of the Scottish Highlands, as it lies immediately to the north of Garron point and the Highland Boundary Fault, which forms the geological divide between the highlands and lowlands of Scotland. The remains of the concrete blocks and barriers of the Cowie Water Stop defence line can still be seen. These were built by the British Home Guard defence forces to thwart any attempted landing by the German army following the invasion of Norway in 1940. Named after Garron Point, the rocky outcrop that forms the most easterly land mass of the Highland Boundary Fault, a massive geological feature that runs fully from the east to the west of Scotland and divides the highlands from the lowlands. Garron Point’s name is probably derived from the old Scots word “Garoun” which means the branch of a tree. There is some debate over the age of the rocks but most experts consider them to have been formed during the Ordovician Era, around 480 million years ago. During the massive upheavals that created Garron Point it is likely that the earliest fish were still evolving and no creatures had yet ventured onto the land. The serpentine layer which can be seen within the rocks gets its distinctive orange colour from the high levels of iron content, which also makes up much of the local red clay soils. Garron Point is designated as a Site of Special Scientific Interest (SSSI) due the interesting range of creatures, plants and rock formations that can be found at this location. Downie Point is the dome shaped rock formation that stands silently on guard at the southern end of Stonehaven harbour. Its near neighbours include the impressive ruins of Dunnottar Castle and the poignant War Memorial atop the Black Hill. In 1652 the troops of the English military commander, Oliver Cromwell set up their cannons on the Black Hill and laid siege to the castle in an attempt to secure the Crown Jewels of Scotland. The Dunnottar defences held strong long enough for the precious jewels to be smuggled out for safekeeping under the floor of a small church at Kinneff, just a few miles away. Although Downie Point is uninhabited today it is known that around 1500 years ago a Pictish family lived on Dunnicaer, its near neighbour across Strathlethan Bay. It seems probable that our pre-historic ancestors also visited Downie Point to enjoy its security and stunning coastal views.

A few miles to the north of Stonehaven lie the Carlin Craigs, an impressive collection of rugged rocks emerging from the sea. Local fishermen have named the Carlin stack The Lion Rock and if you look carefully, you can see the impressive creature facing out to sea as if guarding its territory! These rock features are close to the village of Muchalls which proudly lays claim to the first permanent memorial to commemorate the signing of the treaty between the Allies and Germany with Peace Day on July 19th 1919. The Muchalls Peace Memorial is adjacent to the railway line and serves as a poignant reminder to a very important day in history. At the south of the bay which holds the Carlin Craigs is a spectacular waterfall where the River Muchalls tumbles over a 15 metre sea cliff at the end of its long journey to the coast. 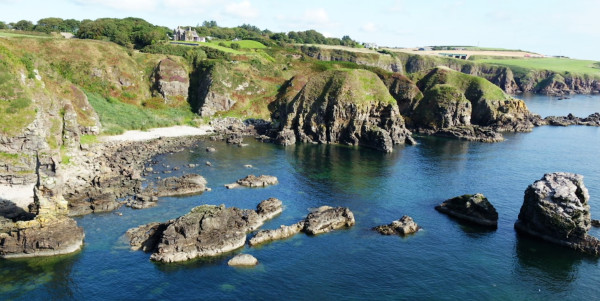